It is a few years since the Guild 6-Bell Striking competition included tower bands from all five branches. The weather was exceptionally warm, not that this was the reason for the good attendance although, no doubt, it did encourage so many supporters to turn up on the day.

The bells at Eastham had been considered a good choice but on the day, proved a more than adequate challenge. This can be advantageous as it can help the judges – Celia Hughes’ D’Aeth from Southport and Alison Holliday (Secretary of the Wigan Branch, LACR) from Ormskirk – more readily discriminate between the bands. (Not that they needed any such assistance!)

Results were as follows:

So, once again!, congratulations to Weaverham and also to Eastham, especially John Collinson, for so ably hosting a memorable event. 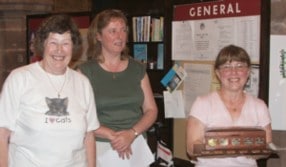 6-bell 2005: Judges Celia Hughes’ D’Aeth from Southport and Alison Holliday from Ormskirkpresent the trophy to Pam Thomson on behalf of the winning band Weaverham.