Judges Tim and Sheila Wellen from Shropshire described the ringing as really good but certain leads from certain bands had catastrophes! Tim noted that rounds at the beginning were not marked but rounds at the end were marked – and that one band chose to ring a lot of rounds at the end of their piece.

Band 1 (Wirral) had some good ringing picking up little faults until disaster struck at lead 11 and again near the end. Band 2 (Mid) rang the quickest and very confidently with minor faults and slight clips. They also rang many rounds at the end which were marked. Band 3 (East) rang consistently but were slow and hesitant with a mistake towards the end. Band 4 (Chester) rang quite quickly picking up slight mistakes and a mishap at lead 12 after which they produced some of the best ringing of the day. Band 5 (South) had a disastrous practice however the test piece was much better until a crunch at lead 12 before settling down to finish.

The afternoon rounded off with open ringing until 5pm.

Thanks are due to Witton tower captain Nick Harris and his team for helping to organise the event and providing excellent tea, sandwiches and cake. 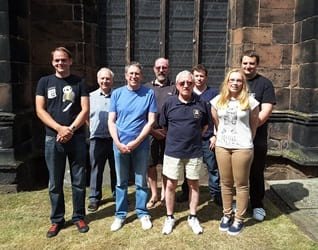 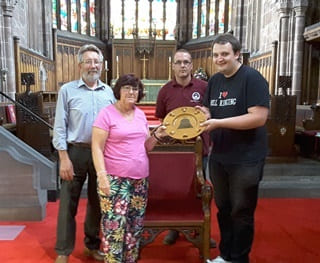