Chester Diocesan Guild Annual Festival and AGM Saturday 11th September 2004 It was the turn of the Mid Cheshire Branch to host the Guild’s Annual Festival and AGM this year. Following ringing at Hartford, Weaverham and Lymm, ringers from all the Guild’s Branches converged on Grappenhall for some more ringing (on the new ropes with all white sallies), followed by the Guild Order of Service, led by Grappenhall ringer and lay reader John Prytherch. The assembled ringers then adjourned to the School Hall for tea provided by the locals and the AGM. There were five Past Masters of the Guild present, and it was especially pleasing to see Brian Harris joining us.

The Annual Meeting itself passed off smoothly, with a rule change being agreed with no problems (What a rarity!), and the Guild’s Policy on the Child Protection issue was discussed, as a result of a committee meeting before the service reporting the outcome of a meeting with a representative of the Diocese. Unfortunately, the Guild and the Diocese still have not agreed a joint policy, with the Guild following the Central Council Guidelines, and the Diocese sticking to the House of Bishops policy.

Most officers were re-elected for a further year, but the current Master, Nick Thomson, was standing down, and handed over the Badge of Office to Peter Robson from Thurstaston, Wirral Branch. Nick has returned to his previous post of Press Officer, whilst Peter Wilkinson, who had been keeping the Press seat hot, is now a Central Council Rep.

The Vote of Thanks was ably and amusingly given by Past Master Ivor Nichols, and further ringing took place at Stretton, still a 6, but soon to have the two new trebles cast last year installed. 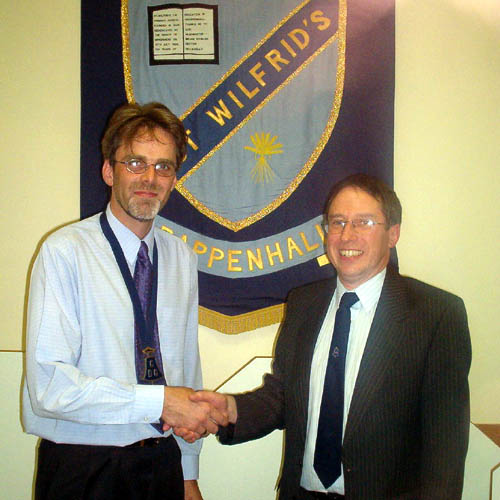 AGM 2004: on the left is the new Master Peter Robson of Thurstaston being congratulated by the retiring Master, Nick Thomson.