Mobile Belfry Display at Cheshire Agicultural Show – 21/22 June 2005 The Chester Guild put on an excellent Ringing Display at the Cheshire Agicultural Show, hiring the Lichfield Mobile Belfry for the purpose. The belfry was erected adjacent to the the Church Marquee where a number of services were held. So in addition to the demonstrations and “come-and-try-it” opportunities, there was some service ringing too during which Cambridge Surprise Minor, Stedman Doubles, Kent and Oxford Treble Bob were rung. A Quarter Peal attempt on the evening preceding the opening of the show proved a bridge too far!

Guild Master, Peter Robson, and Wirral Branch Ringing Master, David Jones, helped in erecting the belfry and were on “guard duty” overnight, setting up camp adjacent to it. Peter can be seen below taking a well-earned break towards the end of the long, hot first day! (The second day looked to be even hotter!)

The display proved a popular attraction and was even presented with a “Special” Rosette by the Agricultural Show’s Committee!

Throughout the first day (your reporter was not in attendance on the second) there was a steady flow of interest from visitors to the show. These included lapsed ringers (one had not rung for over 30 years) and those trying ringing for the first time. Like the more experienced ringers, some were more successful than others in controlling these flighty bells. Where very young chidren wanted to try, they were allowed to chime only. Those showing promise or interest were handed a flyer which included a map of Guild Towers (as in centrefold of Guild Report) and Branch secretaries’ names and phone numbers – so do expect a few enquiries! The following pictures typify the range of visitors trying their hand. 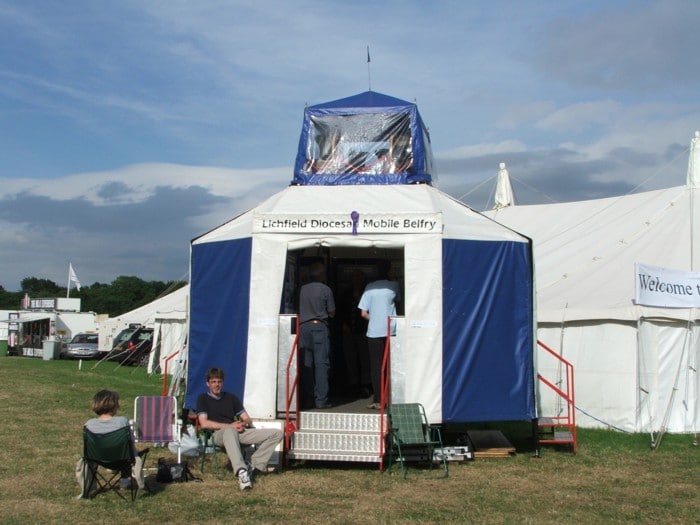 Lichfield Mobile Belfry in use at Chester Show 2005. The display proved a popular attraction and was even presented with a “Special” Rosette by the Agricultural Show’s Committee.