A new 8-bell simulator at St. Mary’s Sandbach (8, 13-1-5 in F) has passed it’s operational testing with flying colours, impressing visitors with a truly immersive experience. Tower Captain Steve Stoker explained that a clever approach to sound is the secret of success.

“We installed a professional amplifier and speaker into the clock room above the bells to project a loud rich bell sound into the ringing chamber below – just like the real thing” said Steve.

The simulator uses eight state-of-the-art belfree motion sensors attached to the bell wheels. These transmit timed signals from the moving bells into a computer to produce a realistic bell sound. There are no cables needed because the signals are wireless. The sensor units are lithium battery powered and, with careful maintenance, will last many years. All the sound and computer equipment was donated and the sensors were purchased with tower funds. In addition a large LCD screen is installed to show the bells in motion.

The tower intends to use the simulator to become a centre for bell training – an ART ‘Listen and Striking’ workshop is already scheduled in September with more to follow. 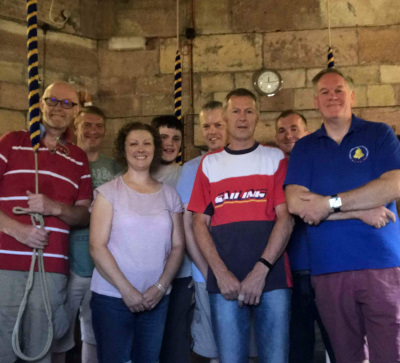 Really delighted you have installed Belfree sensors I had the idea some years ago now and the team have now developed these into a great product.

Well done Steve and the team. This is a great initiative and asset for the guild.